Cathy Raff greets visitors at her workshop center, Beit Elfarasha, in the Old City of Acre (Akko) with hometown pride.

It doesn’t matter that Raff grew up in Georgia, in the south of the United States. Raff moved to Israel when she was 25, in 1985.

After her marriage to businessman Alon Bar-Shany, on a visit to Akko, she asked, “Wouldn’t it be amazing to have a house here?”

After she and her husband purchased an abandoned building in a picturesque cobblestone alley of Akko’s Old City, Raff said, “I wanted to do something more. I had a dream to work with local women.”

So, in December 2020, she opened Beit Elfarasha – Arabic for The Butterfly House — a center where local Arab women give cooking workshops, teaching visitors how to make traditional Arabic cuisine and sharing stories.

Since Beit Elfarasha began, Raff said that hundreds of people have participated in the cooking workshops from both Israel and abroad, including a woman from Dubai.

The people are beautiful 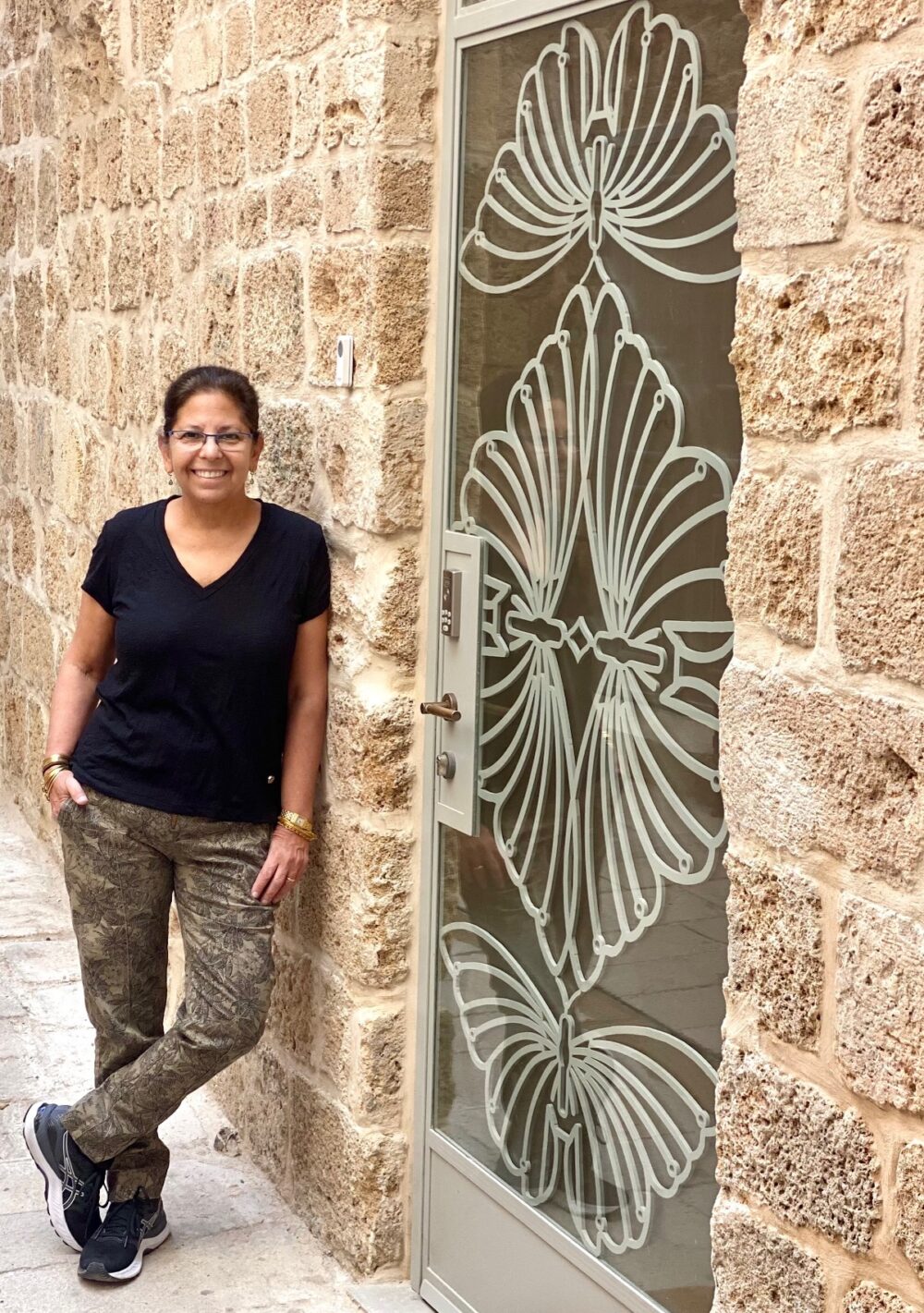 The front door of Beit Elfarasha by Cathy Raff. Photo by Nura Kordi

Beit Elfarasha is located in a building from the Ottoman era, with remnants stretching back to the Crusaders. Raff and Bar-Shany renovated it and added a professional chef’s kitchen with working space for 22 people.

The center also has two suites for guests to stay overnight. Raff said that her primary goal has always been to give tourists a chance to get to know local people.

“People came to visit Akko and then they left,” Raff said.

“There was no contact between visitors and locals. As beautiful as Akko is, the local people are even more beautiful. They’re warm and hospitable and proud of their diverse heritage.”

Raff feels that way despite the rioting of May 2021 when looters destroyed the interior of the building. But she said that neighbors pitched in to help them.

“There is also wonderful camaraderie among owners of guesthouses in the Old City of Akko whether they’re Christians, Muslims or Jews,” Raff said. She added that “the situation seems good again.”

To find the women to lead cooking workshops, Raff organized a Master Chef-style contest and the judges chose several women who never thought of cooking as a profession.

Famed Galilee chef Erez Komarosky, founder of the Lechem Erez bakery chain, volunteered to give the first cooking workshop at Beit Elfarasha to show the cooks how it’s done. 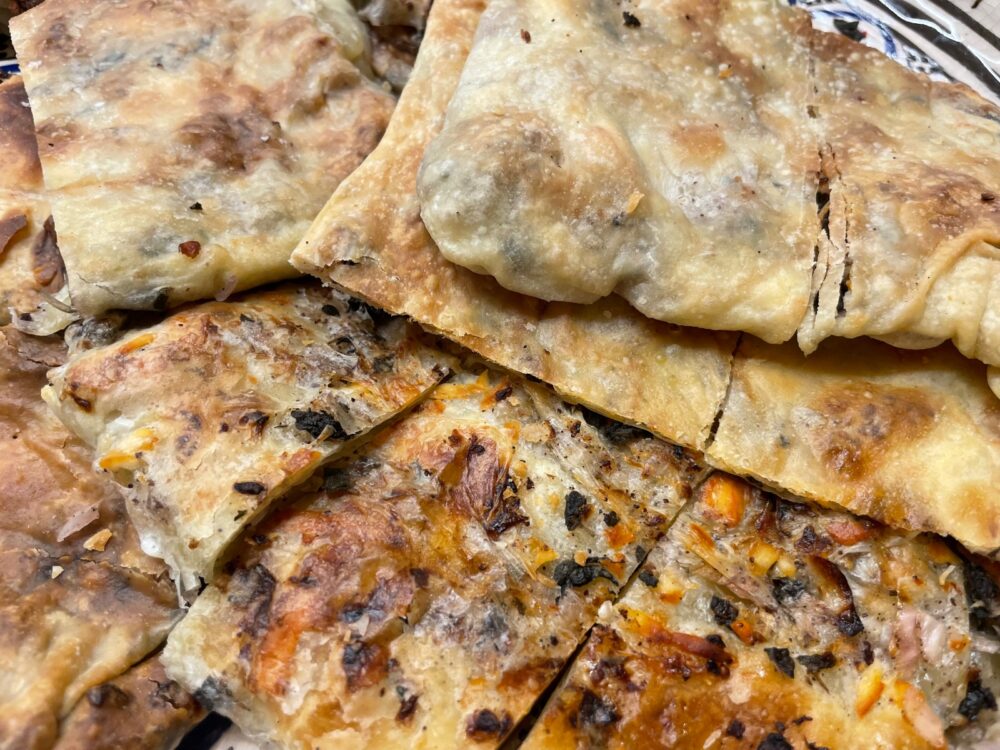 Fatayer, a local pastry made at a cooking workshop at Beit Elfarasha. Photo by Cathy Raff

Raff believes there’s no better way to make connections than over food.

“Food isn’t political and it’s a great way to start getting to learn about each other,” Raff said. “After a cooking workshop, visitors leave feeling like they have a friend in Akko.”

Beit Elfarasha now employs three local women who conduct workshops teaching how to make dishes that might be staples to Akko families but to visitors are exotic, such as maqluba, a chicken with rice and vegetable dish. 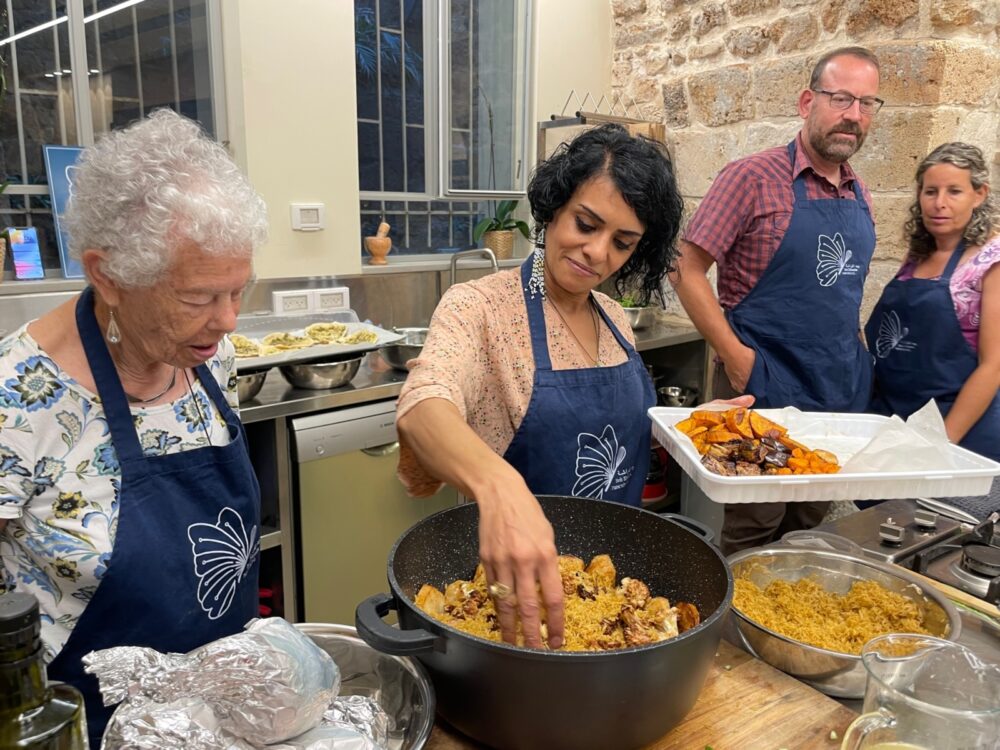 Tina Khatib, one of the Beit Elfarasha workshop leaders, teaching participants how to make maqluba. Photo by Cathy Raff

“It’s a way to empower the women,” Raff said. “They learn to support themselves through this skill.”

Manar Kordi, 45, is one of the cooks. She can trace her roots to Akko back four generations.

She used to work in her family’s souvenir shop in the shuk of the Old City, but left when Covid-19 began and the store was shut down.

Her daughter, Nura, had already begun working as a trilingual manager at Beit Elfarasha.

Kordi said she loves introducing local Akko cuisine to guests because “food is the language of everyone.” 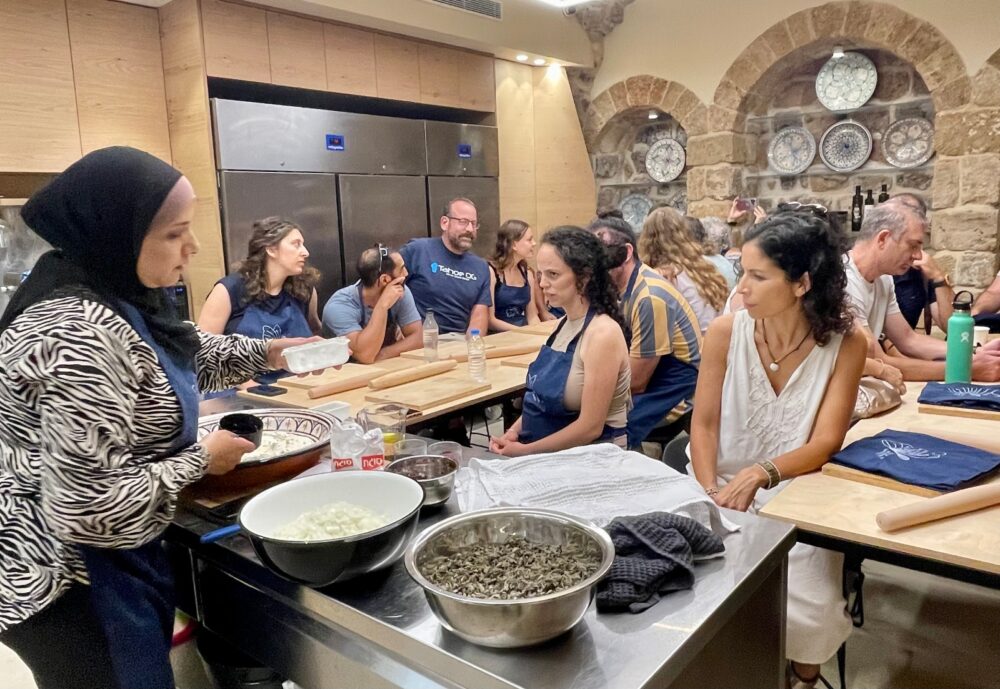 “I learned cooking from my mother who learned it from her mother,” Kordi said. “These dishes have been passed down from generation to generation.”

Tamar Krichevsky visited Akko with 10 of her family and friends and signed up for a workshop with Kordi at Beit Elfarasha.

“We were curious to learn new foods,” Krichevsky said. “The food was delicious. We learned a lot. The experience will last a long time.”

Raff said she chose the name, Beit Elfarasha, because “a butterfly goes through a metamorphosis and changes, and we hope that visitors here will change their attitudes toward other people.”

Raff used to be a professional photographer, often photographing food, and her work at Beit Elfarasha combines all her passions into one place.